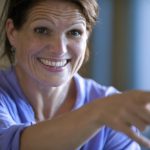 Nicole Kehrberger has a long lasting experience as an award winning actress, acrobat, aerial artist and dancer on international stages.
She combines all those disciplines in her acting and in her teaching.

For 13 years she has worked as master teacher at the Ecole Philippe Gaulier, teaching movement- and acting classes. Nicole started teaching movement and voice classes 30 years ago. Since than she teaches teaches acting, acrobatics, dance, vocal and movement all over the world and is today one of the most sought-after teachers in her field.

As a dancer, aerialist, actress, choreographer and director, she has realized many projects around the world since 1990.

In 2005 she founded the theater association Totales Theater International together with artists from different artistic and national backgrounds. The first production, in coproduction with Teatro Stabile dell´ Umbria and the Turin Festival delle Colline Torinesi “Study on Medea” directed by Antonio Latella, won the precious  UBU Award as best show of the year in Italy.

In 2012 she founded and literally built the „Barfuss Theater am Schillerpark“ in Berlin together with her partner Michele Andrei.